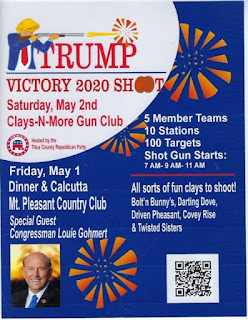 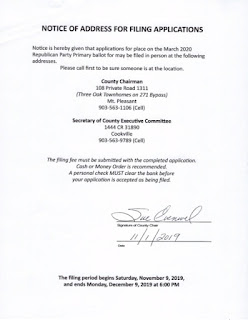 Looking under the Dome 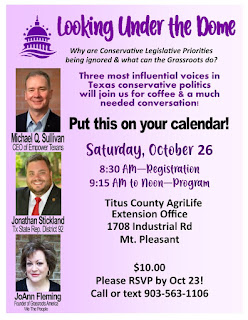 Tony Mize
Have a Blessed Day!

Sent from my iPhone
Posted by Titus GOP at 9:00 AM 1 comments

Just a quick note to let you all know that the Ted Cruz RV will be in Mt. Pleasant tomorrow evening in the Wal-Mart Parking lot, from approximately 7:15 to 7:45 pm.  I have another scheduled meeting so I won't be there, but I hope many of you stop by for a picture and a tour of the bus.  Great campaign picture.

Titus County voters brought clarity to a number of contested local races in March 6 Primary balloting on Tuesday.
With 19 of 19 precincts reporting, unofficial results showed incumbent County Judge Brian Lee fending off a challenge from fellow Republican Denise Reichert, 1,854 votes to 1,530.
In the crowded race for district clerk on the Republican Side, Marcus Carlock earned 1,182 votes, ahead of Esther Holliday (1,046 votes) and Sharyn Cary (987 votes).
LaWyanda Prince tallied 554 votes as the only Democrat seeking the county clerk's office.
In Primary voting for the office of county commissioner, Precinct 2, John Fitch defeated fellow Republican Eddie Perritt 324 votes to 289 votes. Two Democrats were also running: Raymond Johnson garnered 144 votes compared to 65 for Phillip Hoffman.
In the race for county commissioner in Precinct 4, Jimmy Parker defeated fellow Republican Judy Kent, 700 votes to 454.
For justice of the peace Precincts 1, 3 & 4, Steve Agan earned more votes (1,701) than fellow Republican Woody Hughes (889). Tracy Craig garnered 365 votes on the Democrats' ballot.
In one of the evening's closest contests, the race for justice of the peace Precinct 2, Irma Dunn defeated fellow Republican Tim Blair by only five votes, 300 to 295.

Budget and Spending - The Heritage Foundation